Looking Back, Looking Ahead

I’m not a New Year’s Resolution person, as you might gather by this post happening on January 3rd, not the 1st. I used to be! But it turns out that Here is a thing I would like to do quickly becomes Here is a thing I failed to do and oh god I’m a terrible person awfully quick. In recent years, I’ve figured it’s better to treat those things as a sort of rolling works in progress list, revisited every now and then.

Clearly, since it’s been, uh, a couple of months since I blogged, dusting this place off is one of them.

This is where I point out that, if you’re eyeballing your nominations lists and think any of those are worthy of appearing on your ballot, have at it! I’m also in my second (and therefore final) year of Campbell eligibility.

Freelancing:
The alternate ending I wrote for Eternal Lies is out in the world!
Our hard copy of Vampire: Dark Ages 20th Anniversary Edition arrived and it is beautiful. I might be a bit biased, what with having contributed to it.

I wrote for several other RPG projects last year. More info and links when I get the go-aheads.

I thought I’d traveled a lot in 2014. Oh, past me, you sweet summer child. My job changed a bit last year, which means I now get to go out in the field and visit my bookstores. It’s something I’ve wanted to do since I was a wee bookseller, and it’s been wonderful getting out on the road and meeting my new buyers and their teams of eager, enthusiastic booksellers.

The year was also con-tastic: Arisia and Boskone – the latter during one of our many snowmageddon scenarios – followed by C2E2, GenCon, and WorldCon.

I attended our annual nerd family reunion out in Seattle in July, was on staff at Viable Paradise XIX, and trekked down into the mountains of Tennessee with Hill for a Murder Yeti retreat. As you can tell since I’m writing this, we were not eaten by bears. Or murder yetis.

In any given year, I read a whole ton o’books. Part of that is the dayjob, part is my commute, part is just, y’know, liking to read. I’ve been keeping a spreadsheet of them all, and the grand total is… 43! Slightly shy of a book a week, but considering the travel and deadlines I’ve been under most of the year, and that whole writing thing, I’m pretty happy with it. This count is only for prose fiction, by the by. If you added in trades of the comics I read (woohoo Ms. Marvel, Saga, and Captain Marvel!), I’d probably hit a book a week easy. I do intend to do a best-of post. Theoretically while people are still mulling their ballots!

That post will also include thoughts on movies and TV shows I watched, because there were a lot of those as well. I make grabby hands when it comes to a good story, regardless of medium. It was a pretty good year for story (Mad Max: Fury Road! Haven! The Expanse! Star Wars: The Force Awakens!) so I’ll have some things to say in that regard as well.

Let me get the hard announcement out of the way: I’m sad to say that Ace declined to buy more titles in the Night Owls series. That doesn’t mean I’m 100% done with my crew of smartass bookselling monster hunters, but it’s going to be a bit before their adventures continue. I am mulling some options, including potentially dipping my toes into self-publishing for Dead Letters. (The mulling includes taking a look at the contract for the first two books and chatting with my agent about what I’m allowed to do in that vein.) I may also post some short stories featuring the cast up here. First things first, though, I need to finish writing it, and paying projects are going to take precedence.

I will be attending Arisia, Boskone, and WorldCon for sure. Am mulling GenCon, Readercon, and 4th Street Fantasy as well. Without a book coming this year, my attendance at some cons is going to be based on what I can afford.

One of the realities of having a day job and a writing career is, even though it’s nice that the day job means I can use vacation time to attend cons, not all of the con-attending is, y’know, vacation. Cons are also work. Here, take a peek at what my month-by-month looked like last year: 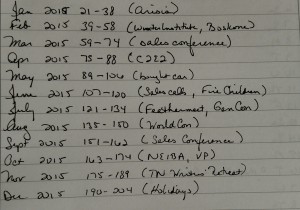 With the exception of May, every month had some kind of travel or social aspect to it. (I didn’t travel for the holidays. I spent them with family and friends, and while they’re all people who I love dearly and am comfortable and happy being around, that doesn’t mean the holidays aren’t frickin’ exhausting.) I realized around September that I was feeling super-tired, even though I’d used up a whole bunch of vacation days. But when you take a closer look, there were several times throughout the year that I’d work a full week, go to a con, come home and go right back to work. No time to decompress.

Also figure that for several of those months, I was either under deadline for RPG writing, promoting Grave Matters and The Fire Children, and trying to do that thing where I write another book.

Two things toward the end of the year put all of that into a bit more perspective. At the writers’ retreat, I spent two solid, eight-hour days doing nothing but writing. Since we were in the mountains, internet was going to be spotty to start. The house did have wifi! HOWEVER. when you have 40 writers connected to it – whether we were “researching” or vacuuming cats on Twitter – the signal bogged way the hell down and was basically useless. Which meant no distractions, woohoo! I cranked out something like 10,000 words over two days. Then, at the end of the year, I had the week off between Christmas and New Year’s (she says, in her last hours of said time off…) It took me a couple of days to get the slacking out of my system, plus there were holiday things afoot, but by… Tuesday? My brain was bombarding me with story things. I haven’t been as productive as I was at the retreat, but it’s been nice to feel the words flow.

Which means, as I was filling out my 2016 planner, I realized I needed to do myself a bit of a kindness. Somewhere in there, this summer, I’m taking a week off just for me. Giving myself permission to spend the days as I like: cleaning my house, catching up on reading, going the hell outside. And, yes, writing. It seems like a pretty low-bar type goal, but it’s one I’d like to hit.

Note that I’m not complaining about the travel or the writing, by the by. This is a job, one that I love. But it’s also okay to have some downtime, which is a thing I struggle with.

Speaking of writing projects, here’s what’s on the docket:

I’ve also started up a project that I’ve declared a trunk novel for the time being. Kind of a writing-without-pressure deal, and a bit of an experiment. I’m a fairly linear writer, and in this case I’m letting myself bounce around if I want to. And be inconsistent with details. And maybe tenses! It’s funny, for a panstser I sure feel the need to go back and fix shit when I figure out a new aspect of the story. I’m trying that thing where you leave yourself a note for future revisions and move on. We’ll see how it goes.

2 Responses to Looking Back, Looking Ahead